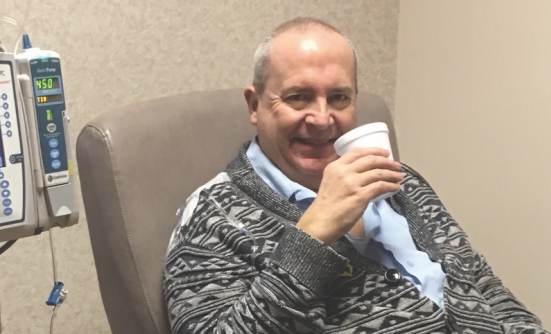 After being diagnosed with throat cancer, Ed Rossman kept in contact with others through the online CaringBridge service, remaining hopeful through music sessions and practicing a weekly mantra.
December 2020 Vol 6 No 6
Ed Rossman
Cleveland, Ohio 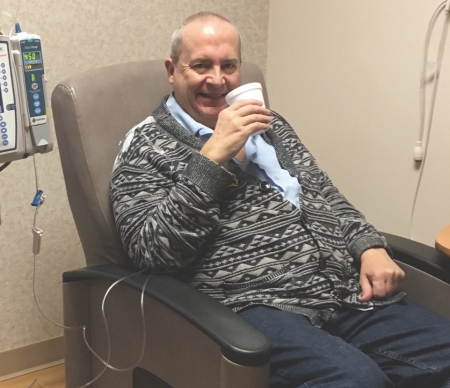 Shortly after my younger sister Betty passed following a brave battle with a brain tumor, I was diagnosed with throat cancer. When discussing with my co-workers the communication challenges we had related to Betty, keeping all of her friends updated on her situation, my supervisor asked if I had ever heard of CaringBridge (www.caringbridge.org).

CaringBridge is an online social platform used to send out an update about people once, instead of 5 or 6 times as we did for Betty. I registered for CaringBridge, invited people to join me, and started sending out my posts. In essence, I was journaling my battle with cancer.

I had a PEG (percutaneous endoscopic gastrostomy) tube placed in my stomach on January 16, 2018. It reminded me of being a Borg from Star Trek. I also had a port inserted into my chest on January 17, 2018. The port was placed there so the nurses would not keep pricking my veins for the chemotherapy and blood draws.

I also got plaster casts of my teeth, which are used to create “tooth trays” that I would use for my fluoride treatments, which are now being used as paperweights. Stephen King would be proud!

Here is an example of my CaringBridge posts: “My chemo and radiation treatments for throat cancer begin on Monday, January 22. Chemo drug is cisplatin and takes about 6 hours to be applied, followed that day by a 10-minute blast of radiation. Chemo will also be done on February 12 and March 9. Radiation treatments will be every day Mondays to Fridays until March 9. After that, the radiation resonates against the cancer for 3 to 4 weeks.”

I scheduled an appointment for a second opinion with another doctor. He concurred about my condition and the treatment regimen. However, he didn’t agree about the port or a feeding tube, unless I really required it. We had a difference of opinion about balancing the “threshold of pain” and the risk of infection from the extra equipment.

The port saved my arm from becoming a pincushion. As if I didn’t have enough problems; I didn’t want to add “nurses trying painfully hard to find a vein” to what I was facing.

He also said he did not recommend a PEG tube unless it “really got bad” swallowing. I cannot imagine having that procedure (to insert the tube) when my immune system was already down, or when I was getting up and down from the radiation table, waiting for the soreness to go away. It was clearly worth doing it in advance, while I was rested and feeling healthy.

One of my favorite books on exercise talks about progressive increments to build muscle. To me, these pretreatment measures were like that, acclimating me to spending time in hospitals.

My hospital offered a class on preparing for chemotherapy. I’m glad my sister Annie and my girlfriend Kathy accompanied me to the chemo class! We went 2 weeks before chemo started, and frankly, I forgot many of the details. It is not a bachelor-friendly lesson plan. There was a lot of talk about germs, using hand sanitizer, a soft toothbrush, baby shampoo. Almost everyone’s head (15 women, 2 guys, including me, attended the class) bounced like bobble heads when things such as “Vaseline intensive care,” not to mention fun brands like “Imodium for diarrhea,” were discussed.

I was blissfully ignorant going into this talk, and didn’t think I needed to prepare, but as one of my favorite role models, Coach John Wooden, said, “Whatever you do in life, surround yourself with smart people who’ll argue with you.”

Early during radiation treatments, I heard the band Journey already playing in the room. Funny, I don’t like that band that much, but I know all the words to their hits, such as “Don’t Stop Believin’.” They said I could bring in my own CDs to the treatment sessions.

The music I picked was a great distraction and motivator for me. I learned that music was a Jedi mind trick I could play on myself to control my attitude when receiving radiation, or during the daily cleaning of my PEG tube dressings. I used a 14-minute version of “Time Has Come Today” by the Chambers Brothers, a longtime favorite, while I did that every day. It prompted me not to miss a cleaning!

I’m a practicing Roman Catholic, and I went through these treatments during the Lenten season. During that time, the church observes the blessing of throats.

I joked with Father James after services that I was thinking of lifting my shirt and having him bless my PEG tube, my alternate throat likely in 2 more weeks. He laughed and said that the blessing is a one-size-fits-all type of thing, it covers the whole body!

I had 3 of my good buddies who connected with me one weekend; they were not guys who use the Internet, so they were not on CaringBridge.

Whenever any of my friends would call or comment on CaringBridge, and say they were supporting me through this difficult time, I tried to spin it, telling them that things at that time were just different, helping them ease their minds, as well as my own.

I stopped using the word “difficult,” and would swap it whenever possible with “different.” That attitude helped me persevere. That, and my great support network. Pharmaceuticals may help cure the disease, but people help you heal!

After I started getting better, I also found myself saying “this week” a lot. It was a good coping mechanism, as my throat area kept going through changes. “This week, I can talk longer at one time without sipping fluid than I could last week.” Or, “I can’t eat grapes yet, something about the juice really irritates my throat…this week.” I knew I would eventually get better and back to normal.

The mantra “this week” is something I still use, to give myself and others around me hope that things will keep getting better, especially with my contracting COVID-19 in November 2020.

It may be derivative of the classic “this too will pass,” but it was my way of telling myself and others what was happening to me in the “now,” and leaving an out for improvement.

As I got better and came into contact with more people asking about my condition, I could honestly tell them what was going on, good or bad, and I included “this week” as a sign of optimism.

Even though I applied as much of the chemo class lessons as I could, and thought that I was pacing myself, I still got hit with an infection in April 2018. Just when I thought I was getting better, an infection spread around the PEG tube area in my chest.

I had been using antibiotics, but the bacteria must have thought these were vitamins, because the bacteria grew wide around the tube-insertion point. Again, the mantra “this week” came into play when running into roadblocks such as the infection, as well as minor victories like enjoying pancakes!

I returned to work in May 2018. It took about a month before I decided to retire. Fatigue was a major factor, and driving 40 minutes would tire me out as never before.

Despite taking extra vitamins and consuming protein shakes, I still had low energy. The dry mouth I experienced caused me to wake up every couple of hours at night. As my wise Dad said, “Healing is a slow process.”

One day after retiring, I noticed on my computer the bookmark for CaringBridge in my browser. Scrolling through the entries got me thinking about giving something back.

My original CaringBridge platform was called “The Rossman Rally,” but then I changed it to “A Guy’s Guide to Throat Cancer.” You can find out more about my book at https://bit.ly/Guysguide.

SurvivorshipLymphoma
You Only Live T-W-I-C-E: A Cancer Warrior’s Motto
By Steffi Dawn Ilagan
Receiving a diagnosis of stage IIIB diffuse large B-cell non-Hodgkin lymphoma at age 26 at the start of COVID-19 meant that Steffi Ilagan had to sideline a lot of her plans. Her story illuminates the meaning of “T-W-I-C-E” when facing cancer. 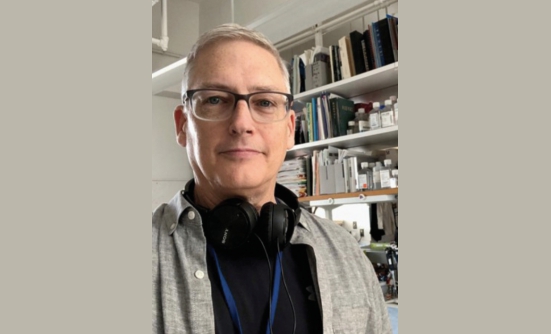 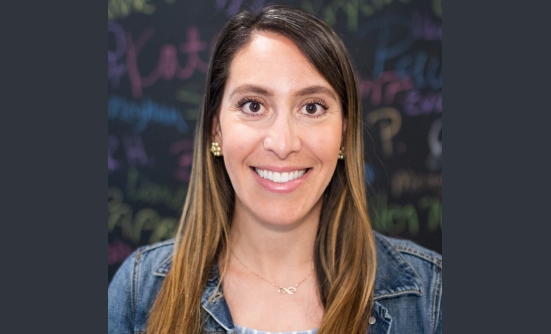 SurvivorshipFertility PreservationEndometrial Cancer
Fertility After a Cancer Diagnosis
By Megan Solinger, MHS, MA, OPN-CG
For young adults facing a cancer diagnosis, consideration of fertility preservation is an important component of the treatment plan. 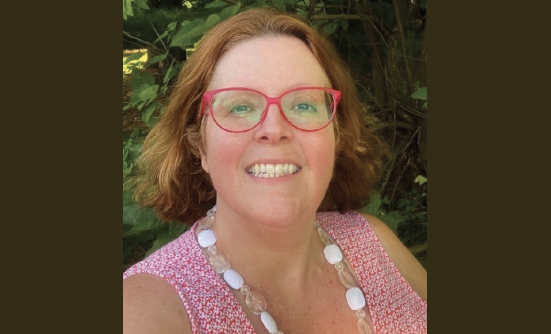 SurvivorshipBreast Cancer
How Planning and Organization Helped in My Breast Cancer Journey
By Heather Barto
Cancer is hard enough. Add a global pandemic to the mix, and everything becomes more challenging, and everyone more lonely, as Heather Barto learned after being diagnosed with breast cancer in 2020.
Last modified: June 9, 2022 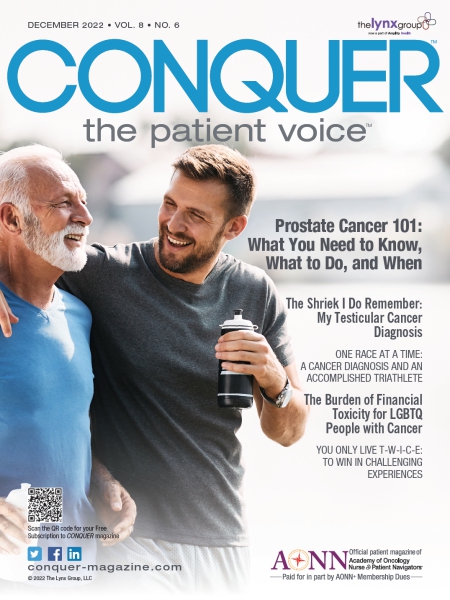